In this lesson, I provided the students with three different tasks. Because each activity included multiple dot cards, the lesson was relatively fast-paced. The pace, coupled with the interactive, participatory nature of the tasks, kept students engaged while still allowing for on-the-fly assessment at each stage. The tasks were:
These tasks were appropriate for the students’ current level of math skills as well as linked to the math work students had been doing in the classroom. In the classroom, math lessons focused on representing various quantities up to 20. I chose to extend representing by asking students to verbally articulate how they counted. I also chose to use dot cards that encouraged students to group or “chunk” the dots, which some students have begun to do in class. The mathematical focuses of the tasks were subitizing and decomposing quantities, which are important number sense skills and prerequisites for addition and subtraction. Number sense is an important, developmentally appropriate skill kindergarten students are working to achieve.

The tasks I gave the students in this lesson were scaffolded to develop and support student understanding. The first task, simply counting the dots, was the simplest. Only when I saw that students understood how to read the dot cards did I move on to activity two, which added a degree of complexity by including the writing of numerals. The final activity was the most challenging, but because the students had just practiced reading the dot cards and articulating their strategies, they were all able to create their own dot arrays and articulate how they had created them. 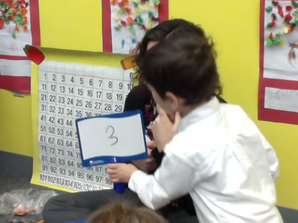 This lesson incorporated several tools. The materials we used were dot cards, a number chart hanging on the wall, individual answer board kits, and counting chips. The number chart, answer board kits, and counting chips were tools the students had worked with previously in class, but I had to teach the students how to use the dot cards. I did this by modeling both reading a dot card and creating a dot card. When we began activity three, I explained to the students that they would be making their own dots to represent the numbers I showed them, but I did not originally model for the students. The students were quick to let me know that they did not understand how to use the counting chips, and that was the point at which I realized I needed to model for them. The chips had no value as tools until the students knew how to use them. As Hiebert explains, “Meaning is not inherent in the tools… We cannot assume that tools immediately have meaning for students, regardless of how obvious the meaning appears to us” (p. 55).[1]

In addition to materials, language was another important tool during this lesson. Students used the “silent thumbs-up” signal to show me they had an answer. They also used oral language to articulate their counting and grouping strategies. I used language as a tool when I explained to the students what they would be doing and when I modeled for them. Finally, we used written numerals, which could be considered language or symbols, to share answers and to give tasks.

The tools I chose to use in this lesson supported students’ thinking and learning. The silent thumbs-up allowed me to assess whether students were actively engaged in counting the dots, and it prevented students from calling out, ensuring that each student had time to think. The individual answer boards had the same effect of requiring each student to participate. Students used the number chart to help them remember how to form the numerals so that the focus of the lesson could be on counting, explaining, and representing rather than handwriting. The number chart also inhibited student learning, however, when students attempted to use it to write the numeral 4. On the chart, the 4 has a closed top, but in class the students had learned to write 4 with an open top. I had to write the open-top 4 on a separate piece of paper for the students to reference. Using counting chips instead of having students draw dot arrays gave the students more flexibility, as they could arrange and rearrange the chips as needed to aid their thinking.

Using tools also allowed me to address a wider range of learning styles: auditory learners explained strategies out loud and listened to classmates explain, visual learners saw the dots on the cards and wrote and read the numerals, and tactile/kinesthetic learners benefited from working with manipulatives (counting chips) to create the dot arrays.
[1] Hiebert et al. (1997).  Making Sense: Teaching and learning mathematics with understanding.  Portsmouth, ME: Heinemann.

Mathematical Discourse and My Pedagogical Focus

In this lesson I tried to promote student discourse. Each student gave her answer and explained her counting and grouping strategies willingly. The students didn’t seem to show any hesitation describing how they counted. The discourse was focused on the students’ strategies, since the students counted the correct number of dots every time. Even if a student had gotten a “wrong” answer, however, I still would have been more interested in asking the student to show us how he or she counted.

The students were responsible for doing the thinking in this lesson. I did not give them any answers or tell them whether the way they counted was right or good. Rather, the students came up with and shared both the answers they found and the various counting strategies they used. I facilitated the discussion by asking questions like, “How many dots did you count? How did you count them? Can you show us how you grouped them? Did anyone else see the groups the same way?”

At two points discourse disrupted the lesson, and both times I was at fault. First, when I gave the students the white boards and told them to write down how many dots they saw, one student tried to write the number word rather than the numeral. My instructions had not been explicit enough. Then, when I introduced the third activity, a student had to ask me for clarification about what they were supposed to be doing. I am glad that I had created an environment in which the students felt comfortable saying they didn’t understand, but I should have modeled the activity and explained it more clearly from the start of the activity.

My pedagogical focus for myself as the teacher was to use a few specific talk moves to enhance student discourse. I succeeded in using revoicing, but I did not ask any students to restate what their classmates had said in their own words. I pushed students to try to see and apply their classmates’ reasoning, however, by asking them to count and explain their classmates’ dot cards. For example, after student A counted and explained her strategy for student B, I asked student B, “Is that how you saw it when you made the dot card? Can you explain it in a different way?” My pedagogical focus helped me achieve the objectives of this lesson by reminding me to question the students more and encourage deeper explanations of their strategies.

Students use the "silent thumbs-up" signal
One of the most important norms I saw in my lesson was that we each count and group using our own strategy, and everyone’s grouping strategy is valid. My students did not hesitate to share their strategies even when they differed from their classmates’ strategies. Both my sketches and my observer’s sketches demonstrate that the students all came up with unique ways of creating dot arrays to represent the numbers 4, 7, and 8. This norm is one that my Classroom Mentor has established in whole-class math work, and I was glad to see it carry over into the small group lesson.

Another important norm for this lesson was the “silent thumbs-up” signal. Again, this is a norm that has been established in the whole-class context. The signal, as discussed above, played an important role in creating an environment where every student had the time he or she needed to count and come up with a strategy. The norm is that if the instruction was to give a signal, when a student knows the answer, he or she shows the signal instead of calling out.

A third class norm that helped students to participate successfully in the lesson was the routine surrounding answer board use. Students have practiced using answer board kits in class, so they knew that we write on the boards when we’re told to, and that we don’t color or scribble on the boards. I didn’t have to manage behavior with the answer boards because the students already knew what to do.

Additional norms surrounding general behavior expectations for school played a role in my lesson as well. I could tell students, “Criss-cross applesauce” or “give me a silent thumbs-up” and they knew exactly what I expected them to do. Having pre-established norms and routines allowed more learning to take place because I didn’t have to focus on management.